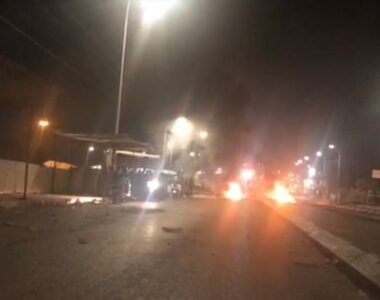 Israeli soldiers attacked, on Thursday evening, Palestinian protesters near the al-Jalama military roadblock, northeast of Jenin, in northern West Bank, and invaded several villages and towns in the area.

Media sources said dozens of Palestinians marched in solidarity with the detainees in Israeli prisons and chanted for liberation and independence before the soldiers attacked them with live gas bombs, concussion grenades, and rubber-coated steel bullets.

They added that several Palestinians suffered the effects of tear gas inhalation, before receiving the needed treatment.

In related news, the army invaded many villages and towns, especially Ya’bad, ‘Aneen, Taybeh, Rommana, and Faqqu’a, near the illegal Annexation Wall in Jenin, looking for Ayham Kamaji from Kafr Dawn, and Monadel ‘Obeidat from Ya’bad.

The soldiers also invaded several areas in the western part of Ya’bad, in addition to installing roadblocks, before stopping and searched dozens of cars and interrogated scores of Palestinians.

It is worth mentioning that Ya’bad and surrounding areas have been subject to extensive and ongoing invasions, especially after Enfe’at and Kamaji managed to escape from Gilboa’ Israeli prison, along with four other detainees who were captured.