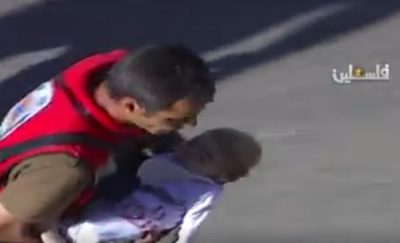 The Palestinian Health Ministry has confirmed, Friday, that an infant, only 18 months of age, is currently in a serious condition after inhaling tear gas fired by Israeli soldiers at homes in ‘Aboud village, west of Ramallah, in the occupied West Bank.

It stated that local medics resuscitated the infant’s heart and lungs, before moving him to a hospital in Ramallah.

The infant, identified as Abdul-Rahman Mohammad Barghouthi, was later transferred to Hadassah Israeli medical center, in occupied Jerusalem, due to the seriousness of his condition.

It is worth mentioning that the soldiers prevented the Palestinian ambulance from reaching the family home of the wounded infant, an issue that forced the medics to run to the property and carry the child back to their ambulance.

The infant was wounded after several Israeli army jeeps invaded the village, and clashed with youngsters, who hurled stones on the armored vehicles, while the soldiers fired dozens of gas bombs, and rubber-coated steel bullets.

The soldiers also shot and injured five Palestinians with live rounds, one with rubber-coated steel bullets, and caused dozens of suffer the severe effects of teargas inhalation.

The attack took place after dozens of Palestinians held a nonviolent protest, in solidarity with the Palestinian detainees, ongoing with the hunger strike since April 17th.

The soldiers assaulted the protesters, and fired many gas bombs, live rounds, rubber-coated steel bullets and concussion grenades on them, just as they approached the main entrance of ‘Aboud.