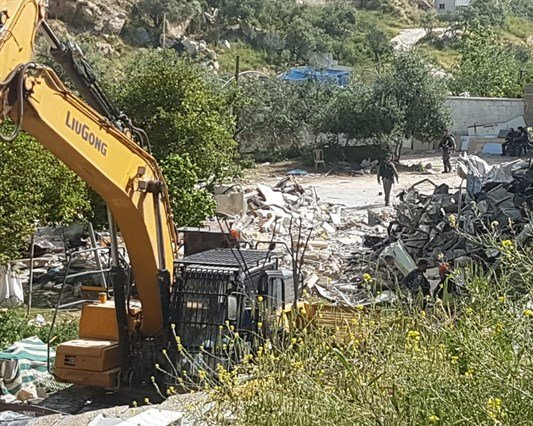 For the second straight day, Israeli forces invaded Silwan neighborhood, in East Jerusalem, to carry out demolitions of Palestinian homes, and beat back residents who tried to stop them. The Israeli forces reportedly used tear gas, stun grenades, pushing and beating against the residents, causing injuries.

At least seven youth were injured by Israeli forces, several of whom were hit by rubber-coated steel bullets, according to local sources.

The Israeli authorities had issued demolition orders for three homes in the Wadi Yasol neighborhood of Silwan, in East Jerusalem, just south of the Al Aqsa Mosque.

When the troops arrived with military vehicles and armored D9 bulldozer to demolish the three homes, belonging to brothers Anas and Qusay Burqan, a number of local residents came out to the street to protest, and to try to prevent the demolition.

The protesters did not manage to stop the demolition, and the Israeli soldiers entered the homes after spraying the protesters with tear gas and rubber-coated steel bullets. They forced the residents out of their homes, and demolished them.

This follows similar demolitions in the same neighborhood the day before.