International Campaign to #BoycottPuma Speaks Out in Cities around The World 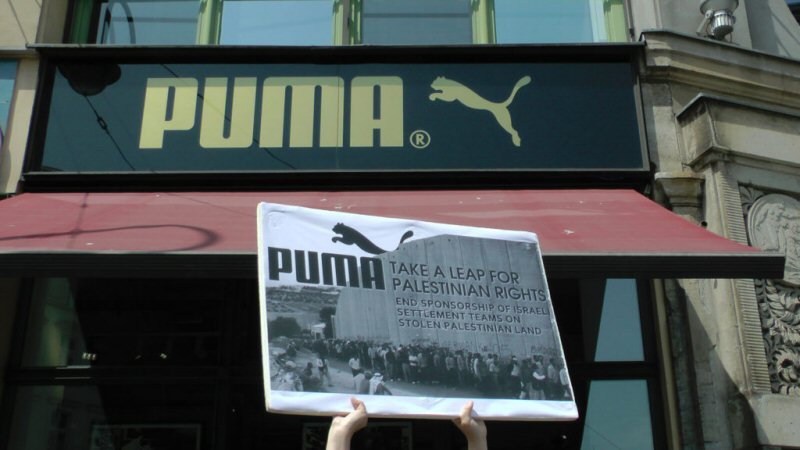 BDS organizers and activists for justice in Palestine organized dozens of international actions calling for a boycott of Puma on Saturday, 15 June. After Adidas dropped its sponsorship of the Israeli Football Association in 2018 after being presented with over 16,000 signatures of protest, Puma took up the sponsorship. This means that the global German athletic manufacturer is a partner in apartheid, supporting teams in Israeli illegal settlements on occupied Palestinian land.

In the German capital, BDS Berlin organized a protest outside the Puma Concept Store at Hackescher Markt. Organizers delivered leaflets and information about the boycott call to staff at the Puma store to be forwarded to corporate headquarters. The response from passers-by was overwhelmingly positive, and participants distributed hundreds of flyers to nearby people. The demonstration included loud chants to “Boycott Puma! Boycott Apartheid!” as well as social justice songs and music. After the rally, a falafel vendor from the nearby market donated a round of sandwiches to the activists involved.

In Toulouse, the Collectif Palestine Vaincra, a member of the Samidoun Palestinian Prisoner Solidarity Network, held an information stand for over 2 hours at Olivier Place in Toulouse. Despite being displaced from their original location by the prefecture to a less heavily-trafficked location at the last minute, activists distributed 800 flyers and had hundreds of positive conversations. Dozens of people took selfies in solidarity with the campaign.

Actions took place throughout France, including in Lyon, Marseille, Montpellier, Strasbourg, Paris and a few days earlier in Clermont-Ferrand, Foix, Tours and elsewhere.

In Paris, the violent provocateurs of the Jewish Defense League (JDL) attempted to physically attack activists from the BDS France campaign in order to attempt to force them to end their boycott action outside the Puma store.

However, their attempt failed and over 20 activists participated in the action, receiving strong support from the public for their anti-apartheid campaign.

In Charleroi, Belgium, the Plate-forme Charleroi-Palestine distributed information about Puma’s involvement with sponsoring Israeli apartheid and the call for boycott from Palestinian athletes and collected support photos for the campaign.

In Vienna, BDS Austria held an information table outside the Puma store, posting informative displays and distributing flyers to hundreds of passers-by about the athletic gear company’s complicity with Israeli occupation and apartheid.

In Amsterdam, docP activists took to the streets for the international day of action, delivering a petition to the management of the Puma store and distributing flyers on the Koningsplein and in the Vondelpark.

Manchester Palestine Action kicked off the international day of action with a direct action inside Puma’s Manchester office, protesting and delivering the message that sponsoring apartheid is not acceptable:

Organizers followed up the action with a day of protest from Piccadilly gardens and through Manchester City Center, targeting corporate complicity in Israeli occupation, specifically by Puma, Barclays and HSBC.

In Rome, BDS Roma secured the support of 14 rugby teams in the city to join the call of the Palestinian athletes to #BoycottPuma:

They organized an action on 15 June outside the Puma store in the city center to highlight the company’s complicity.

The campaign against Puma is not stopping. Palestinian football players themselves struggle to play, practice and improve their skills when they face Israeli violence, including arrests and imprisonment by occupation forces. Samidoun Palestinian Prisoner Solidarity Network urges people and organizations to join the ongoing actions to put pressure on Puma to end its sponsorship of Israeli apartheid, including taking the #BoycottPuma pledge and organizing events and actions at Puma stores and corporate offices.