Jürgen Todenhöfer: Why Did Israeli Soldiers Shoot Me?! (VIDEO) 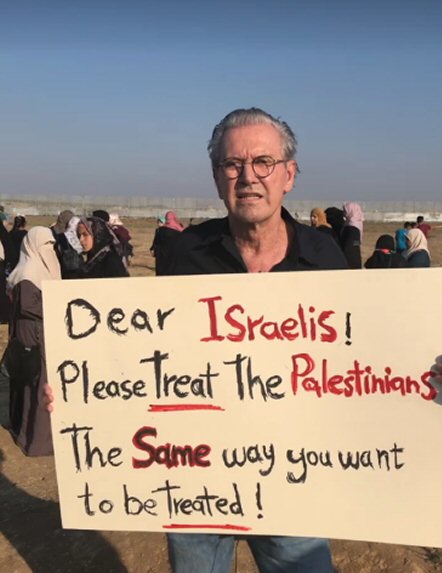 On Friday, the 14th of June, German author and journalist Jürgen Todenhöfer decided to participate in the weekly protests that Palestinians in Gaza had launched every Friday, calling for their rights and breaking the inhuman 12-year-old siege.

However, this neutral perspective towards the Palestinian-Israeli conflict and being a supportive of the two state solution have not saved him from an Israeli bullet. Days of Palestine reports that he commented, in a Facebook post, after his injury, saying: “Dear friends, one cannot ‘demonstrate’ more peacefully than I tried to do today, at the border fence of Gaza. I held up a poster: “Dear Israelis, please treat the Palestinians the way you want to be treated! When I turned a few hundred meters from the border, an Israeli soldier shot me in the back with a rubber bullet.

“Watch the 7-minute video! There is no other constitutional state in the world where you are shot at for such a conciliatory sentence. It can’t go on like this.”

This is not the first time Israeli snipers have targeted international supporters for Palestinians, as this happened 16 years ago with the American activist and diarist,Rachel Corrie, who was a member of a pro-Palestinian group called the International Solidarity Movement (ISM).

On March 16, 2003, Zionist soldiers were engaged in another aggressive operation, destroying Palestinian houses in a military zone between the Rafah refugee camp and the Egyptian border.

Rachel  was part of a group of three British and four American ISM activists, when she placed herself in the path of a Caterpillar D9R armored bulldozer in the area, and was subsequently run over and fatally injured.