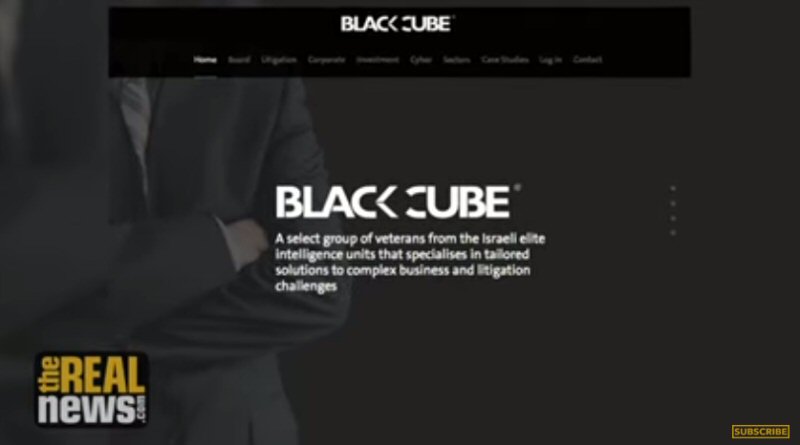 Shir Hever discusses the dangers of privatizing security and intelligence, as a private company called Black Cube, that claims to use Israeli Mossad procedures, hires out its services to the highest bidder and goes after international as well as Israeli activists, business people, and politicians.

Last week an Israeli investigative TV show called Uvda revealed that the private intelligence firm black cube was hired in 2014 by Israeli billionaire Idan Ofer to smear Israel’s then-Finance Minister Yair Lapid. This is only the latest revelation about the covert actions that Black Cube has been undertaking. The company is also known to offer corporate espionage by using techniques that the Israeli Mossad and other security agencies have perfected. The company became famous when it was discovered that movie producer Harvey Weinstein had hired black cube to spy on women who filed complaints against him for sexual assault. Weinstein allegedly received the recommendation for contracting Black Cube from former Israeli Prime Minister and Minister of Defense Ehud Barak. Weinstein apparently believed that former Mossad agents would be able to get him off the hook for sexual harassment, assault, and rape allegations. Here’s what the well-known journalist Ilana Dayan had to say about Black Cube when introducing last week’s broadcast of the Uvda documentary.

ILANA DAYAN: Behind heavy locked door, a high tech environment, and also the salary and benefits of the group of brilliant people who sit there. Some of them are graduates of the Mossad and other classified units. But the product which they are producing can be dark, and much more dangerous than what they imagined. They are called Black Cube, and their official goal is to provide business intelligence. What really lies behind these words we are exposing here this evening for the first time.

GREG WILPERT: What made this report so shocking for Israelis was not the methods of deception, sting operations, and surveillance that Black Cube uses, but rather that Black Cube has no qualms about taking on Israeli targets as well, including activists, journalists, state officials, and politicians. Everything is possible for the highest bidder. Black Cube responded to the report with fury, and launched a lawsuit for over 15 million British pounds against the show Uvda.

Joining me now to look at the latest revelations of Black Cube’s activities is Shir Hever. Shir is a correspondent for The Real News Network living in Heidelberg, Germany, and his most recent book is The Privatization of Israeli Security, published in 2017 by Pluto Press. Thanks for being here again, Shir.

SHIR HEVER: Thanks for having me, Greg.

GREG WILPERT: So, Black Cube was founded in 2010 and gradually became famous alongside other Israeli private intelligence companies, such as NSO and PsyGroup. What did the Uvda documentary focus on, and why did it focus on Black Cube, and why now?

SHIR HEVER: Well, Uvda now finished their 25th season, and this was a very big deal for them to do this very in-depth investigative journalism work on Black Cube. I think for the journalists working in Uvda, for Ilana Dayan and the others, the fact that this company is using these methodologies where they use sting operations, where they use surveillance and deception, they track their targets to know what is important for them on an emotional and personal level, and then create fake characters that promote those ideas or those ideologies in order to win their trust, all of that is not a problem, because these are journalists that consider this kind of work to be completely normal when it’s done by the Israeli security organizations in order to entrap Palestinians or agents of other countries, and so on.

However, when it’s a private company which is doing it for profit, and when the targets are also Israeli targets, then there is a sense of fear. And I think that’s the reason that Uvda decided to focus on Black Cube. And I think this sense of fear that, in fact, the very methods that have been used by Israeli authorities and Israeli agencies in order to control Palestinians under occupation, in order to eliminate possible critical voices, are now being used internally by certain Israeli billionaires against others, and against politicians, and so on, is something that makes Israelis lose faith in their security agencies. That’s why they’re so afraid. And I think that’s also why members of Black Cube itself, people working for the company, either directly or indirectly, have come forward and agreed to speak with the journalists from Uvda.

GREG WILPERT: Industrial or corporate espionage is not a new phenomenon, but it does seem that Black Cube seems to get contracts with the worst kinds of customers, such as Kabila in the Democratic Republic of Congo, Harvey Weinstein, and others like that. Now, other Israeli companies like NSO took contracts from Saudi Arabia and the UAE. Why do Israeli companies seem to have fewer scruples than companies from other countries?

SHIR HEVER: Well, I think it’s a it’s a circumstance that we have to understand how this came to be. Because it would be wrong to say that Israelis just by their upbringing or just by their culture are more willing to cross moral lines. That’s not the case. What is the case, however, is that the Israeli security organizations are in a state of crisis. And the generals, the commander–the chief agents of Mossad and other security institutions are facing a daily struggle to keep Palestinian resistance under control, and they’re failing. And because they’re failing, they’re losing public support and public legitimacy, and so they’re turning to the private sector.

And I think what we see with these companies like Black Cube and NSO and PsyGroup is that these companies reek of desperation. They take these contracts, which are very problematic contracts, because nobody else will. And I think it’s also interesting and very telling that if you look at the cases of all these scandals that we’re now shown by Uvda, and you can, of course, look at the case of Harvey Weinstein; Kabila, Joseph Kabila of the Democratic Republic of Congo, is no longer in power. Weinstein did not get off the hook. And other people who hired Black Cube were not able to use that information that they got, this blackmail material, in order to get off whatever accusations they were facing. And that shows that the companies are also not very successful.

So they’re trying to build on their reputation as former Mossad agents, or agents of other Israeli security agencies, trying to say we are the best spies in the world because we work for the Israeli Mossad. And in order to make money, in order to survive in a world that just doesn’t have a place for them anymore, because the world doesn’t really need these apartheid officers who are trained at humiliating people and controlling them. And I think that is the reason that these companies are taking these very, very notorious contracts with notorious customers, and also the reason that they’re not very successful in providing a good service to their customers.

GREG WILPERT: Now, officially, intelligence companies are subject to state regulation, normally. Has regulation failed in the case of Black Cube? And if so, why?

SHIR HEVER: I think this is something that we see not just in Israel. We’ve seen this even more strongly in the United States. And the Washington Post and other newspapers have discovered that when the United States started to privatize intelligence, as one of the most extreme cases of privatization of security, the intelligence officers in the private market were all former state employees, or former state intelligence agents, now working for the private sector. They double their salaries, or increase them even more than twofold, and they control access to sensitive government data. And they have an incentive not to share their information with state institutions, because by controlling this information they leverage their power as a private company towards the state, toward the government. So the result of privatization of security is a snowball effect. It makes the private sector stronger and stronger, and at some point it’s no longer possible to regulate it, because these companies now have more control over a state’s intelligence capabilities than the state intelligence officers themselves. The best intelligence agents, or the most intelligent ones, the best educated ones, the ones with the most experience, have already left the government service and moved on to the private sector. And this is something that happened first in the United States.

And in Israel, I think the government was very naive to think that it won’t happen in Israel, because the Israeli generals are loyal and patriotic and Zionist. And that’s simply not true. And as soon as they came into the private sector, they started to operate as people do operate in the private sector: for a company, for profit, maximizing their income, maximizing their profit, and gradually crossing one line after the other in trying to get another contract and another contract, even for dictators like Joseph Kabila or sexual predators like Harvey Weinstein. And this shows–and also against Israeli officials, against Israeli politicians. And I think that’s something that everyone has to be aware of, that governments who are willing to relinquish control over security and surveillance of the private sector are opening a Pandora’s box, and this can lead to a very devastating thing.

GREG WILPERT: Finally, what would you say can governments learn from this? When private security companies get out of hand like this, what can be done?

SHIR HEVER: Well, at this stage, when the horse has already left the stable, then the governments are in a very difficult–the government is in a very difficult situation. The one thing a government can do in this situation is, first of all, close down the company and remove all of its licensing. Right now the Israeli Ministry of Defense gives Black Cube a license to operate while also declaring that they’re officially not to be considered a military company, although what they do is really sometimes crossing the line into military activity. So I think the Ministry of Defense in Israel, in any country, should be very, very careful about what kind of freedom such private companies receive. And I think it’s also very important that people will have access to transparency.

The victims of companies like that–you know, if we look at this documentary about Black Cube, Black Cube has targeted a very long list of people who were lied to, deceived by the company, approached by fake agents, and so on. And only when this documentary show, Uvda, started to investigate it, they reached out to these people and told them that the person that they spoke to was actually a spy, and they didn’t even know. And I think that’s the government’s responsibility, to give that information to the victims, to track those cases, and to inform people that they have a claim and their privacy has been violated, and that if they want to file a lawsuit, for example, they should. And it shouldn’t be only up to journalists who may stumble upon this case, and maybe not.

GREG WILPERT: OK. Well, we’re going to leave it there for now. I was speaking to Shir Hever, Real News Network correspondent in Heidelberg, Germany. Thanks again for joining us today, Shir.

At TRNN official: Israeli Authorities Confiscate and then Attempt to Sell Palestinian Classrooms