Army Injures Several Palestinians During A Peaceful Protest Near Nablus 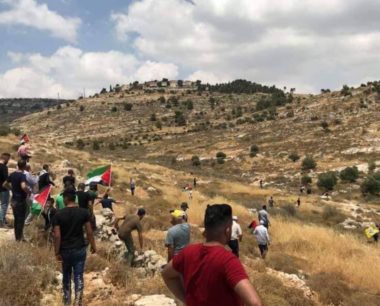 Israeli soldiers attacked, Friday, a weekly procession in Azmout village, east of the northern West Bank city of Nablus, causing many Palestinians to suffer the severe effects of teargas inhalation.

Ghassan Daghlas, a Palestinian official who monitors Israel’s illegal colonialist activities in northern West Bank, said the residents marched to their lands to protest the Israeli decision to illegally annex 20 Dunams of Palestinian orchards and farmlands located in Azmout and Deir al-Hatab villages.

He added that the army confiscated the Palestinian lands to pave a new military road, and to annex them to the illegal Elon Moreh colony.

During the procession, the soldiers fired a barrage of gas bombs and concussion grenades, causing many to suffer the effects of teargas inhalation, in addition to causing fire in surrounding lands.