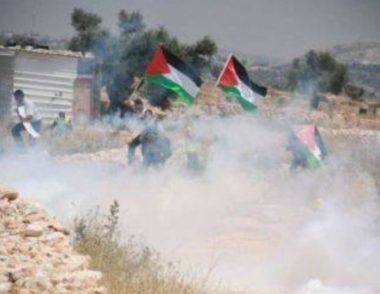 Israeli soldiers injured, Friday, many nonviolent protesters in during the weekly procession against the illegal Annexation Wall and Colonies, in Ni’lin village, west of the central West Bank city of Ramallah.

The locals, accompanied by Israeli and international peace activists, marched from the center of the village and headed to the Palestinians orchards while chanting against the ongoing illegal occupation, the Annexation Wall and colonies, in addition to condemning the so-called “Deal of the Century.”

They also carried Palestinian flags, and chanted against the American attempts to void the legitimate, internationally guaranteed Palestinian rights of liberation, independence and sovereignty.

The Popular Committee against the Annexation Wall and Colonies in Ni’lin, said the soldiers fired many live rounds, rubber-coated steel bullets, gas bombs and concussion grenades, causing many to suffer the effects of teargas inhalation.