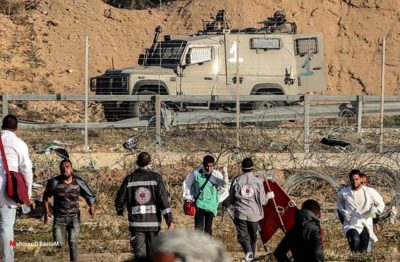 Medical sources stated that 49 Palestinians were injured with live fire, including a female Paramedic, east of the city of Rafah, in southern Gaza.

Some of the injured were transferred to hospital for further treatment, while many were treated at the scene.

Since the beginning of the Great March of Return protests at the Gaza border on March 30, 2018, Israeli forces have been responsible for the killing of more than 250 Palestinians, and injuring over 23,000. Many Palestinians have suffered debilitating injuries, including limb amputation.

The stated objective of the Great March of Return demonstrations is to demand the right of the Palestinian refugees to return to the pre-1948 historical Palestine, to call for the complete lifting of the illegal blockade of Gaza.

For an updated report about Friday’s protests and injuries in the Gaza Strip please follow this link:

PCHR: “On 61st Friday of Great March of Return and Breaking Siege, Israeli Forces Wound 92 Palestinian Civilians, 28 of them were Children and Four were Paramedics,including Female Paramedic”