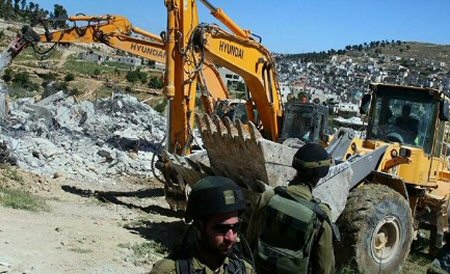 The Jerusalem Center of Socio and Economic Rights, Monday, warned of the escalation of Israeli demolitions in occupied Jerusalem, noting it bears the nature of a collective form of punishment.

The director of the center Zeyad al-Hamouree warned, in a statement, that the Israeli municipality and civil administration are carrying out demolitions in Qalandia, Sur Baher,  Silwan and al-Bustan neighborhoods.

He explained that Israel plans to demolish wide parts of Palestinian facilities to build Israeli facilities, noting the Israeli plans to establish the so-called National Park in Arrababh neighborhood.

He stressed, according to Al Ray, that the next phase in Jerusalem is so difficult, especially regarding residential buildings.  He said that dozens of demolition orders are carried out without warning.

He called upon the international community for immediate action in stopping the illegal and collective demolition process in occupied Jerusalem, noting that Israel aims to evict all Palestinians from the city and to settle Israelis instead of them.