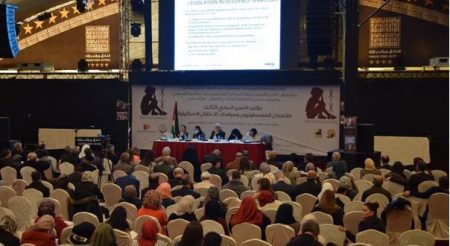 “Stop the war on our children’s minds.”

The conference took place in the Grand Park Hotel on the 15th and 16th of March.  For two days, Palestinian and international speakers made an assessment of the problem and ex-detainee children told their story. The goal was to join forces in formulating a national and international strategy to end the demolition of our youth’s childhoods.

“It is our responsibility to end the war on our children. The international community must stand as one human rights council and hold Israel accountable.” This is how Prime Minister Dr. Rami Al Hamdallah opened the event. It was basically the message of the conference in a nutshell, according to the PNN.

The Israeli occupation detained and interrogated 1,300 Palestinian minors last year alone. More than 300 children are in prison right now and subjected to torture, unfair trials by illegal military courts and sentencing based on ‘secret evidence’. The number of arrests has almost doubled the last two years, and the interrogation methods got harsher. The need for such a conference was urgent, but not as urgent as the need for action and support from the international community.

Speakers described the Israeli detention policies and their international law violations. A panel of psychiatrists explained the effects on the mental health of the children. A group of liberated children even told about their horrible experiences: stories about scare tactics using dogs, severe beatings and refusal to administer insulin to a diabetic to make him confess.

The conclusion was that the systematic arrests of children, the abusive interrogation methods and the harsh sentences for very minor offences are part of a very deliberate strategy. Not a strategy to improve security or obtain information, but to break the spirit of a generation.

At the end of the conference a national strategy and an international campaign was launched. The main message to the international community was to put more pressure on Israel to stop their violations of international law and human rights. The European Union in particular was called upon to activate article 2 of the E.U.-Israel Association Agreement, the free trade agreement between both parties. . This stipulates that respect for human rights and democratic principles is an essential element for trade between them, and Israel is in clear violation of this. Since the E.U. is Israel’s most important trade partner, it could be an important diplomatic weapon to persuade Israel to comply.

Mr. Akram Alayasa, from the Commission of Detainees & Ex-Detainees Affairs, had this message for the children of Aida Camp, who face imprisonment and violence from the occupation every day:

“We try to keep your child spirit alive, and I’m sorry if we didn’t do what we were supposed to do…”