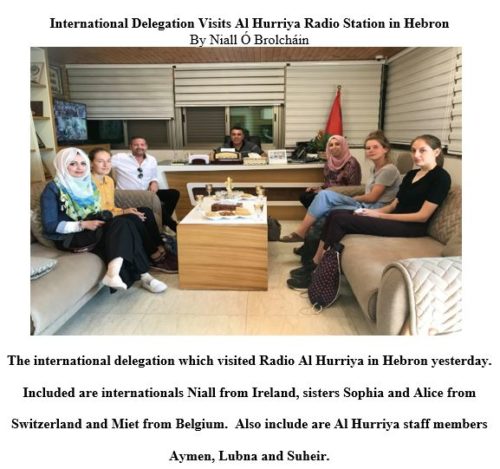 By Niall Ó Brolcháin – IMEMC: An international delegation of volunteers visited the Al Hurriya radio station in Hebron on Sunday, July 6. The volunteers are here from various parts of the world to do different programs at the Go Palestine Center, Hebron. Teaching English, Media, Law and Human Rights Internships and intensive Arabic courses are among the different programs offered by the Center.

Radio Al Hurriya, Freedom in English, was established in 2000 and has between two and three million listeners on average throughout the West Bank and Gaza. It is a very popular Palestinian radio station.

The station was forced off the airwaves last year when it was raided and ransacked during the night by Israeli Occupation forces. $400,000 worth of damage was caused and all the station’s equipment was confiscated. It has never been returned. This is the fourth such occurrence of an incident like this. The station now operates from a new building with new state of the art equipment. The Chairman of the Board, Aymen Naeem Ismail Al Qawasmi, was himself arrested and imprisoned in 2000 under trumped-up charges of incitement to violence. The station has around sixty-five members of staff, all of whom had no jobs last year and no means to provide for their families when the station was closed down by the Israelis. The delegation also had the opportunity to talk live on air with presenters Ali Jobee and Lubna Abu Turki and did a short webcast of their experience here.

The delegation had a wonderful time at Radio Al Hurriya and would like to thank all the staff there who made them feel so welcome and at home. They look forward to returning to visit there again soon.