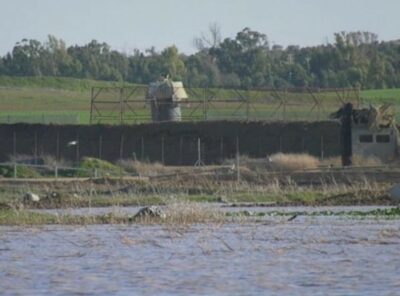 Media sources said the army opened the levees toward agricultural lands near the fence, east of Gaza city, and east of the central area of the coastal region.

The water flooded many homes in neighborhoods east of Gaza city, Deir Al-Balah, Al-Boreij, and az-Zawaida in the Central District.

The army also opened levies east of Khan Younis in the southern part of the Gaza Strip, causing significant losses to the farmers’ lands, sheds, and homes.

The locals, along with Civil Defense teams and workers of local municipalities, rushed to the flooded areas to help the families, and continue to monitor their conditions, especially amidst the heavy rainfall.

The WAFA Palestinian News Agency said the flooding in the Central District caused the destruction of huts and sheds and flooded the street on the Al-Aqsa Hospital.

Every year when the rainfall intensifies in the area, the Israeli army opens the levees leading to the Palestinian lands to ensure Israel’s illegal colonies across the perimeter fence do not suffer any flooding or gathering of water from the rain.

While Israel’s colonies and communities have advanced infrastructure, the Israeli army chooses to open the levees to flood lands and homes in the eastern parts of the besieged and impoverished coastal region.