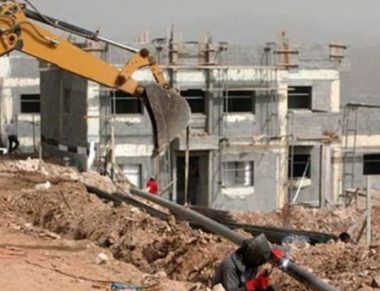 The Israel “Planning and Construction Committee” has approved the construction of twenty new units in the illegal Matzad colony, built on private Palestinian lands, southeast of Bethlehem, in the occupied West Bank.

Hassan Breijiyya, the representative of the Committee Against The Annexation Wall and Colonies in Bethlehem, said Israel has lately started a new policy that significantly boosts various illegal colonies and outposts in the occupied West Bank.

He added that the new decision to build the 20 units came shortly after Israel approved the construction of 500 additional units in Eldad colony, illegally built on Palestinian lands in the Ta’amra area, in Bethlehem.

Israel’s colonies in the occupied West Bank, including in and around occupied East Jerusalem, are illegal under International Law, the Fourth Geneva Convention and various international treaties and resolutions.

This is in line with previous years. Last year, the U.S. gave Israel $3.7 billion – about $10.14 million per day. In other words, the new aid package amounts to an increase of around $27 million per year. (Read More on If Americans Knew)

Israeli Soldiers Abduct Many Palestinians In Hebron And Jerusalem