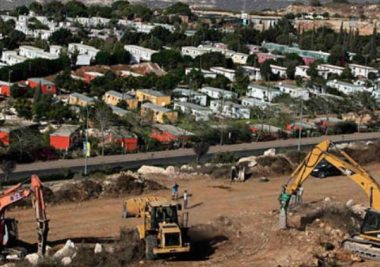 The so-called “Civil Administration Office,” run by the Israeli army in the occupied West Bank, has approved the construction of 450 units in illegal colonies built on Palestinian lands, south and east of Bethlehem.

The new units will be part of Gush Etzion colonialist block, while the Regional Council in Gush Etzion Block is working on getting approval for the construction of an additional 17.000 new units.

170 units will be built in Daniel Colony, built on Palestinian lands in the al-Khader town, south of Bethlehem.

84 units were approved in Kfar Eldad colony, built on Palestinian lands in at-Ta’amra village, east of Bethlehem, and 38 in Kfar Etzion, south of Bethlehem, in addition to 150 units, which were previously approved.

Israel’s colonies in the occupied West Bank, including in and around occupied East Jerusalem, are illegal under International Law, and the Fourth Geneva Convention to which Israel is a signatory and a constant violator.