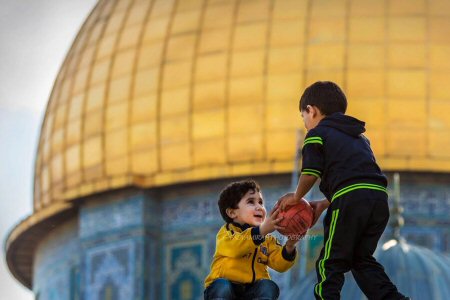 A report by the Israeli TV Channel 7 said that orders were issued to police units at Al-Aqsa in occupied Jerusalem not to allow children to play with balls in the courtyards.

It also reported, according to Days of Palestine, that the Israeli Supreme Court issued an order banning Jerusalemite children from playing in Al-Aqsa courtyards.

The order was issued after complaints filed, about a month ago, by settlers who stormed Al-Aqsa Mosque and claimed to have seen children playing football around the schools.

According to the Supreme Court ruling, “ball games on Temple Mount [Al-Aqsa Mosque] are prohibited as it violates its sanctity.”

According to the Israeli police, the order is aimed primarily at the areas adjacent to the Islamic schools located in the courtyards of Al-Aqsa Mosque.

Jewish organisations have demanded that such practices be banned and that those found doing so be prosecuted or at least have their balls confiscated.

They claim that playing football “is a violation of the law regarding holy areas. The maximum punishment for this is seven years of imprisonment.”

They also claimed that such practices are considered “a desecration of a holy site and cause emotional distress” to the Jews storming the mosque.