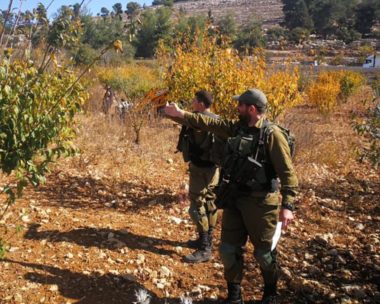 Israeli soldiers and the so-called “Civil Administration Office, the executive branch of Tel Aviv’s occupation of Palestine, has started digging and preparing to pave a new segregated road for illegal colonialist settlers in Beit Ummar town, north of the southern West Bank city of Hebron.

Awad added that Israel is planning to pave a new road passing near Hebron-Jerusalem Road, and that the soldiers declared the area “a closed military zone,” before preventing the farmers and landowners from entering it.

The lands are at least 90 Dunams (22.23 Acres), owned by Palestinians from Safi and Sleibi families, and are planted with olive grapes and almond trees.

Abdul-Hadi Hantash, a Palestinian expert in Israeli colonialist affairs and maps, said the new road will pass through several kilometers on private, fertile lands, extending from Etzion Junction, north of Hebron, and passing near Beit al-Baraka in the opposite direction of the al-‘Arroub refugee camp, all the way through “Jabal al-Qarn” natural reserve between Beit Ummar and al-‘Arroub.

He added that the planned road would also extend to Nabi Younis Junction at the southern entrance of Halhoul town, and would eventually lead to the illegal annexation of about 400 Dunams (98.84 acres) of Palestinian lands in Beit Ummar and Halhoul towns.

Hantash stated that this new road is meant to boost Israel’s policies of segregation and annexation, to advance its plans for constructing and expanding its illegal colonies, built on occupied lands in direct violation of International Law and the Fourth Geneva Convention.

In 2016, the United Nations Office for the Coordination of Humanitarian Affairs (OCHA) issued a report about the Israeli plan to establish a new colony in the property of Beit al-Baraka, meaning “House of Blessing,” built 70 years earlier on a 38-dunam (9.5-acre) church compound located on the main road between Bethlehem and Hebron, opposite to Arroub refugee camp, and warned of humanitarian concerns resulting from his plan.

Beit al-Baraka also used to serve as a hospital providing free treatment to people suffering from tuberculosis until it was shut down in 1983. Jewish settlers later bought the compound from the church, through a fake company.