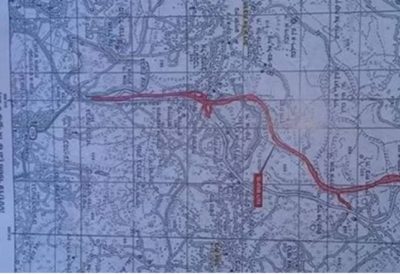 The Israeli occupation authorities and the military have issued orders illegally confiscating 401 Dunams (99.0893 Acres) of Palestinian lands, to pave a new segregated colonialist road which will also lead to the confiscation of an additional 1273 Dunams (314.5 Acres), as part of a large colonialist project in the southern part of the occupied West Bank, including linking colonies with Gush Etzion Bloc, and occupied Jerusalem.

The Israeli authorities said that the new road would “serve the public’s interests,” and provide better commute and “security for both the settlers and the Palestinians,” which, in other words, means it is a segregated road.

The Palestinians were given 50 days to file appeals, a process which is usually eventually denied by Israeli courts that serve the interest of its occupation of the West Bank.

The Palestinians said that this road would lead to the isolation of the al-‘Arroub refugee camp and Beit Ummar town, north of Hebron, in addition to the large areas of lands it will confiscate.

The road, which was dubbed as al-Arroub bypass road when Israel first announced it in the year 2003, will also pass through archeological areas and a natural reserve, and will lead to the destruction of the Palestinian orchards and farmlands. It will also pass right near the graveyard of the al-‘Arroub refugee camp in order to link with Karmie Tzur illegal colony, and will lead to the closure of the northern entrance of Halhoul city, which will only have Nabi Younis road as entrance and exit.

The devastation and destruction this road would cause to the Palestinians are enormous, as it will pass through Natural Basin #2 in sections of the Palestinian communities of Khirbat Um Tala’, Khirbat Breqout, Beit Za’ta, Jabal Abu Souda, Freidis, Jabal al-Qarn and Wad ash-Sheikh.

It will also pass through Natural Basin #4, in sections of the villages of Wad al-‘Arroub, and Basin #8, which will lead to the annexation of nearly 740 Dunams of land owned by Beit Ummar residents, north of Hebron.

Also among the impacted areas by this segregated road are sections of Khirbat Um al-Kheiran village, al-Hawawer, Ras al-Qadi, Khirbat Um Daraj, Khirbat Beit Khraf, al-Jomjoma, Ein ash-Shonnar, Um Suleiman, ar-Ramouz, in addition to passing through Basin #10 and parts of Basin #11 in sections of Thaher al-Baw and Wardan, where it could lead to the confiscation of 530 Dunams from Halhoul town.

The path this road is planned to take includes vast areas of Palestinian lands planted with various types of trees, especially almonds and grapevines, in addition to large areas of lands belonging to the research center of the al-Arroub Agricultural College.

It also passes near the Al-Arroub graveyard, and the playground, and could pose serious risks to many Palestinian homes in the al-Arroub refugee camp, as Israel might plan to demolish them to “secure the road,” especially since the army has previously issued orders stopping the construction of homes in the western area of the refugee camp.

The Land Research Center said that the strategic importance of this road to Israel is linking the so-called “Greater Jerusalem” with Keryat Arba’ colonialist block and Karmie Tzur colony and added that the Palestinians would not be allowed to use it in the future.

It is worth mentioning that in the year 1997, the then commander of the Central Command of the Israeli army Illan Birn issued a decision denying the Palestinians access to the bypass road of the Israeli colonies in the area, and his decision was later “frozen” but was never voided. In 2016, the United Nations Office for the Coordination of Humanitarian Affairs (OCHA) issued a report about the Israeli plan to establish a new colony in the property of Beit al-Baraka, meaning “House of Blessing,” built 70 years earlier on a 38-dunam (9.5-acre) church compound located on the main road between Bethlehem and Hebron, opposite to Arroub refugee camp, and warned of humanitarian concerns resulting from his plan.

Beit al-Baraka also used to serve as a hospital providing free treatment to people suffering from tuberculosis until it was shut down in 1983. Jewish settlers later bought the compound from the church, through a fake company.

It said that, in 2012, “a settler organization secretly purchased a property in this location from a Swedish Christian shell organization that had purchased it a few years earlier from a Presbyterian church. The property is known as “Beit al-Baraka” and consists of eight buildings on some 40 Dunams of land.”

In October of 2015, the Israeli government decided to “adjust” the boundaries of Gush Etzion to include Beit al-Baraka and its lands.

It its report in April 2016, OCHA warned that “the population and/or operation of the settlement on a permanent basis are likely to result in the adoption of security measures, including restrictions on Palestinian access.

“Based on common practice in other settlements, farmers have expressed concern about the possible installation of additional fences around the property and the imposition of restrictions impairing access to the area.

This is in addition to pre-existing concerns related to the paving of an alternative by-pass road to the section of Road 60 passing next to Al Arroub camp that may involve the expropriation of land and uprooting of trees.

Additionally, on 14 January 2016, the Israeli authorities demolished two barracks belonging to refugees from Al Arroub camp, previously used as chicken coops, on the grounds that they lacked an Israeli building permit.

Two days later, the authorities demolished a concrete wall and a water cistern on the same grounds, and bulldozed a nearby plot of land, uprooting 85 olive, almond and grape trees. These incidents have triggered concerns about the potential demolition of existing structures and crops with outstanding demolition or evacuation orders following the opening of the settlement.

Risk of forced eviction: A Palestinian refugee family of seven has lived in one of the compound’s structures for about 40 years under an informal understanding with the Presbyterian church, which employed the head of household in the compound.

Over the past few months, the family has been under pressure from the Swedish organization to vacate the building. On 6 February 2016, three family members (all adult siblings) were prevented by Israeli soldiers from entering their home, unless they signed several documents related to their eviction, which they refused to do. The soldiers also carried out a search of the house.

To date, two of the individuals are still denied access to the compound, while the remaining five family members continue to reside on the site. They live in a very tense environment due to the outstanding threat of eviction and the access gate being under the control of private security guards. The family recently petitioned the Israeli Supreme Court against their eviction and obtained a temporary injunction until a court decision is issued on their case.”

Nevertheless, nearly 18 months after OCHA issued its report, the Israeli government approved a colonialist project with a budget of 800 Million Shekels, to build new segregated roads, for the use of the colonists in the West Bank, including the al-‘Arroub bypass road.

On October 25th, 2017, Israeli Prime Minister Benjamin Netanyahu sent a message to the heads of colonies in the occupied West Bank, informing that his government has approved the construction of many bypass roads, and that the budget will be part of the one planned for the year 2018.

However, the implementation was delayed due to the political situation in Israel, including the corruption investigation against Netanyahu, and he currently seems to be trying to win the vote of the colonists in the current election, through this project.