Israel Collected 100.000 Shekels In Fines From Palestinian Children In May 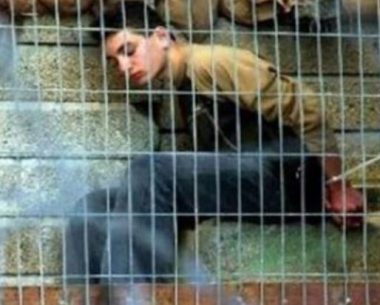 The Palestinian Detainees’ Committee has reported that Israeli courts have collected, in May, more than 100.000 Shekels in bail and fines, imposed on detained Palestinian children, held in Ofer Prison, near Ramallah, in central West Bank.

In a report released on Sunday morning, the committee stated the soldiers have abducted twelve children in March and sent them to the children’s section of Ofer prion.

It added that twelve of the children were taking prisoner during violent Israeli army invasions and searches of homes, while eighteen were taken from the streets, one after stopping him at a military roadblock, and one was abducted for entering Jerusalem without a permit.

The Committee also stated that two of the detained children were shot before the soldiers abducted them, and ten others were repeatedly attacked by the army, in addition to being tortured during interrogation.

37 of the imprisoned children have already been sent to military courts and were sentenced to prison terms varying between three and twenty months in prison.

The Committee said the courts have imposed fines amounting to at least 100.000 Shekels, punishing the imprisoned children and their families.

It added that, while the Palestinians continue to face deteriorating financial conditions in the occupied territories, the excessive fines became another form of abuse and blackmail, putting the impacted families under serious restraints and hardships.