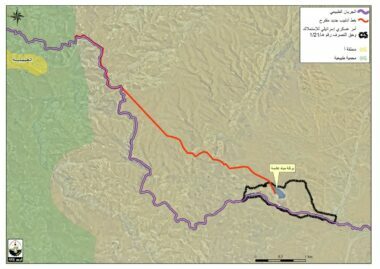 The Applies Research Institute – Jerusalem (ARIJ), has reported that the Israeli occupation authorities issued an order for the illegal confiscation of 658 of privately-owned Palestinian lands in the al-Obeydiyya town, north of Bethlehem, south of occupied Jerusalem in the West Bank.

ARIJ said the order was issued Friday, and targets at least 658 Dunams (162.59 Acres) in Basin #6 of farmlands that belong to the town.

It added that the army wants to illegally annex the lands to build a water reservoir that would benefit the illegal Israeli colonist in the Jordan Valley and the Dead Sea areas.

In April of 2019, Israel issued a military order regarding changing the natural stream of sewage water in the wilderness to treat the sewage and use it solely for agricultural purposes in its illegal colonies, without benefiting the Palestinian farmers.