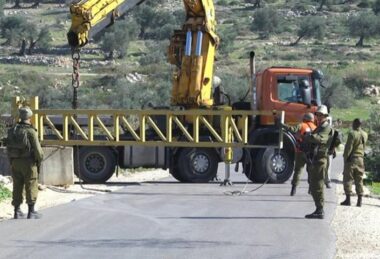 Israeli soldiers injured, on Saturday evening, a young Palestinian woman, and her brother, at the main road of Hizma town, northeast of the occupied Palestinian capital, Jerusalem.

Eyewitnesses said the soldiers were extensively deployed at the entrance of the town, before firing many gas bombs and concussion grenades at the Palestinians and their cars, to force them away.

They added that a young woman, from Jerusalem, was driving her car when some gas bombs landed near her, causing her to faint due to the severe effects of teargas inhalation.

The woman’s brother saw his sister’s vehicle and rushed to help her before several soldiers assaulted him, causing cuts and bruises to various parts of his body.

The woman and her brother were rushed to a nearby Palestinian medical center for treatment.

It is worth mentioning that the soldiers closed all roads leading to Hizma, and prevented the Palestinians from entering or leaving it.