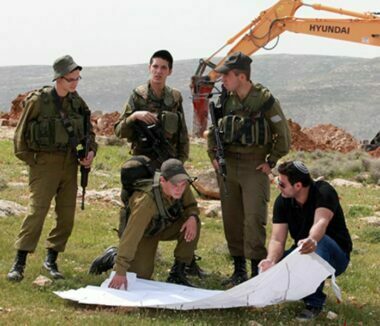 Israel approved, Sunday, a plan to confiscate dozens of dunams of privately-owned Palestinian lands near Bethlehem, south of occupied Jerusalem, in the West Bank. The soldiers also uprooted lands near Hebron and Nablus, in southern and northern West Bank.

Hasan Breijiyya, the head of the Bethlehem office of the Wall & Colonization Resistance Commission, stated the lands are close to “Beitar Illit A” illegal colony, which was built on stolen Palestinian lands.

Breijiyya added that the lands are in Basina #3 and 4 in the al-Matrasiya and Khbirbat al-Kobra areas, west of Nahhalin, in addition to Basic #3 in Wad Abu al-Hamra area in Husan village, west of Bethlehem.

The lands are slated to be used for segregated “public facilities” and roads, in addition to various residential units for the illegal colonialist settlers.

In related news, Israeli soldiers bulldozed and uprooted large areas of Palestinian lands in the Khirbat Zannouta area, east of the al-Thaheriyya town, south of Hebron.

Fayez Khdeirat, the head of Zannouta Village Council, said the lands are owned by members of the at-Till family, and added that Israel wants to confiscate the Palestinian lands to expand the Industrial Zone of the so-called “Regional Council of Settlements,” in southern Hebron.

On Saturday, the soldiers bulldozed Palestinian lands in Yitma and Qabalan town, south of the northern West Bank city of Nablus to expand the illegal Rahalim colony.