Israel Continues The Bulldozing Of Palestinian Lands In Northern Plans 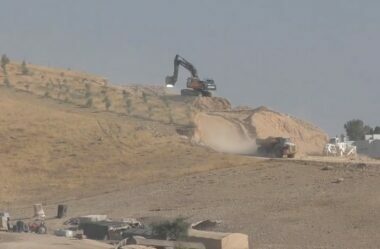 On Monday, Israeli bulldozers continued the bulldozing of Palestinian lands in the Khirbat Ehmayyir area in the Khirbat al-Farisiyya village, in the Northern Plains of the Jordan Valley, in the occupied West Bank.

Daraghma added that the bulldozers were working on a hilltop and large areas, accompanied by many Israeli soldiers.

Last Friday, the colonizers started the installation of a new outpost on stolen Palestinian lands in the Khirbat al-Farisiyya.

It is worth mentioning that the Israeli army initially declared the lands a “closed military zone,” preventing the Palestinians from entering it, but at the same time allowing the colonizers to enter them to establish an outpost.

The Palestinians fear that the Israeli army plans to annex 28.000 Dunams of Palestinian farming and grazing areas, which are essential for the shepherds and farmers.