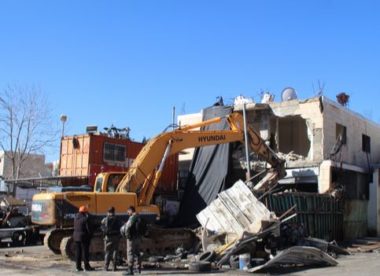 The Wadi Hilweh Information Center in Silwan (Silwanic) said the soldiers, accompanied by members of the City Council in occupied Jerusalem, in addition to dozens of police officers, invaded Wadi al-Jouz and demolished the building.

Silwanic stated that the soldiers invaded the property two days ago, and handed al-Malhi the demolition order, informing him that it will be carried out within 48 hours, before he contacted his lawyer to file an appeal, but the soldiers carried the demolition out after removing some of his property from the buildings.

Al-Malhi said that the first floor of the building, was constructed twenty years ago and consisted of a Garage, a car-wash facility and stores, while the second floor consisted of three apartments, which were built five years ago, and the third was still under construction.

One of the apartments was rented out to a family from Silwan, and the second was supposed to be inhabited by al-Malhi’s son.

The City Council in occupied Jerusalem also ordered the family to pay a fine of 160.000 Shekels.

Also in Silwan, a Palestinian man from Silwan had to demolish his own home to avoid excessively high fines and fees after the City Council decided to destroy the property for “being built without a permit.”