Palestinian Demolishes His Home In Silwan To Avoid High Penalties 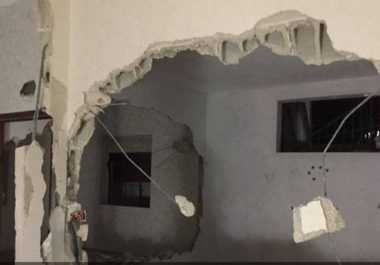 A Palestinian man from Silwan town, south of the Al-Aqsa Mosque in occupied East Jerusalem, had to demolish his own home, on Wednesday evening, to avoid excessively high fines and fees after the City Council decided to destroy the property for “being built without a permit.”

The Wadi Hilweh Information Center in Silwan (Silwanic) said the Palestinian, Majdi Abu Tayeh, said the City Council informed him that he has until next Monday, February 4th 2019, to demolish his home at his own expense, or face very high penalties, fines and fees if the City Council carries out the demolition.

Silwanic added that Abu Tayeh built his home four years ago on his own land, to shelter his family of six, including four children.

The demolition order was issued although a court in occupied Jerusalem ordered him to pay a fine of 55.000 Shekels, and he was making all needed arrangements, but the City Council went ahead and demolished his property.

While Israel continues to build and expand its illegal colonies in the occupied West Bank, including Jerusalem, in direct violation of International Law and the Fourth Geneva Convention, the Palestinians continue to face numerous restrictions and heavy fines and fees just to be able to build homes on their own lands, or expand existing property to accommodating their expanding families.