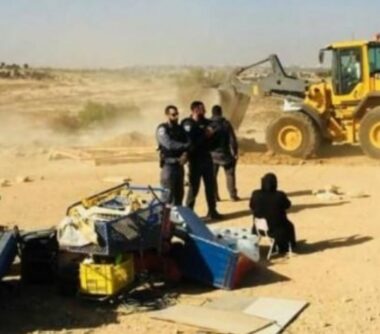 On Monday, the Israeli authorities demolished the Al-Arakib Bedouin village in the Negev for the 207th time since 2010.

Many military vehicles and police cars surrounded and invaded the village, forcing the families out of their tents and sheds before demolishing the village for the 207th time.

On September 7th, the village was destroyed for the 206th time since 2010 after Israel decided not to recognize it.

Today’s demolition of the Bedouin community is the eleventh this year alone, while last year, the village was demolished 14 times.

The Palestinians continue to rebuild their community, determined to remain on their lands, despite the constant Israeli violations.

Al-Araqib is a Palestinian village located to the north of the city of Beersheba in the Negev desert (southern Palestine). It was established for the first time during Ottoman rule.

It is one of the 51 Arab villages in the Negev that the Israeli government does not recognize, although they predate Israel.

The occupation authorities have worked since 1951 to expel its residents to control their lands through extensive house demolitions and the vast lands equivalent to two-thirds of historic Palestine.

Israeli bulldozers demolished the village on July 27, 2010; Israeli troops demolished all its homes and displaced hundreds of its residents under the pretext of building without a permit.

The residents of the village built it again, to be demolished, again and again.

The steadfastness of Al-Araqib became a symbol of the battle of wills waged by the Palestinians of the occupied interior, especially in the Negev, to survive and preserve land and identity from the policies of Judaization.