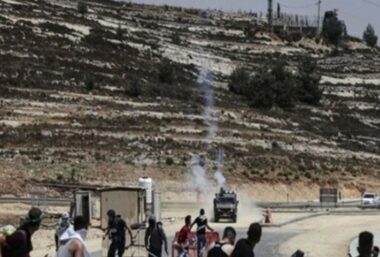 On Monday evening, Israeli soldiers shot three young Palestinian men with live fire at the northern entrance of the Al-Biereh city in the Ramallah and Al-Biereh governorate, in the central part of the occupied West Bank.

The soldiers fired many live rounds at the Palestinians, shooting a young man, 19, with a live round in the thigh, and another, 18, with an expanding bullet to the leg, in addition to a third Palestinian who was shot in the abdomen after the bullet went through his arm.

Palestinian medics rushed the three wounded young men, who suffered moderate wounds, to a hospital in Ramallah; many Palestinians suffered the effects of tear gas inhalation.

The soldiers also invaded the Al-Mazra’a al-Gharbiyya town, north of Ramallah, and installed a roadblock at its main entrance before stopping and searching dozens of cars and residents.