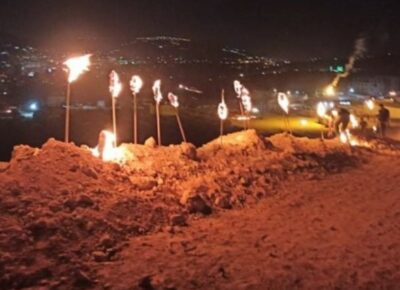 Late Monday night, Israeli soldiers injured at least thirty Palestinians at the main entrance of Beita village, south of Nablus, in the northern part of the occupied West Bank.

The Israeli army claimed it invaded the town after Palestinian fighters fired many live rounds at military vehicles near the town’s main junction.

During the invasion, the soldiers fired rubber-coated steel bullets, gas bombs, and concussion grenades and chased dozens of Palestinians.

The Nablus office of the Palestinian Red Crescent Society (PRCS) said the soldiers shot two Palestinians with rubber-coated steel bullets and caused 25 to suffer the effects of tear gas inhalation, in addition to three who were injured after falling when the soldiers chased them.

On Monday evening, the soldiers shot three young Palestinian men with live fire at the northern entrance of the Al-Biereh city in the Ramallah and Al-Biereh governorate, in the central part of the occupied West Bank.

The Palestinians held processions across the occupied West Bank to protest the escalating Israeli violations, including the Monday killing of two young men, Bassel Qassem Basbous, 19, and Khaled Fadi Anbar, 21, from the Al-Jalazoun refugee camp, near Ramallah.