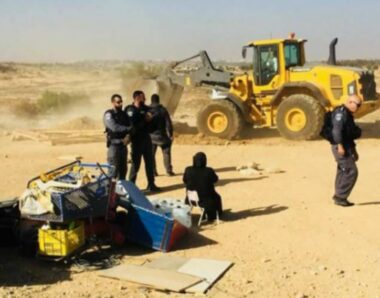 The army destroyed the tents and makeshift tin shelters built by residents, rendering those families without shelter, in an attempt to force them to abandon their land.

Located in the Negev desert, in southern Israel, the village, unrecognized by the state, has been demolished eight times in 2021 alone, the residents continually rebuild their shelters on the same land.

The Bedouin residents, have lived on the land since the Ottoman period, decades prior to the creation of the state of Israel.

Approximately 240,000 Palestinian Arabs live in the Negev desert, however the Israeli occupation authorities do not recognize their ownership of the lands, and refuse to provide them with basic services such as water and electricity.

The state uses all means and methods to push the Palestinian Arabs to despair and frustration to uproot and displace them.

1: Everyone has the right to own property alone as well as in association with others, and
2: No one shall be arbitrarily deprived of his property.