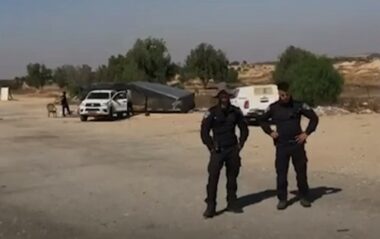 Israeli soldiers demolished, Wednesday, the al-Arakib Bedouin Palestinian village, in the Negev, for the 190th time.

Aziz at-Touri, a member of the Local Committee for Defending al-Arakib, stated that dozens of soldiers and police officers surrounded the community before invading it.

He added that the soldiers demolished sheds and barns, and removed the residential tents, displacing the families.

It is worth mentioning that the village was first demolished in July of the year 2010 and was since demolished 190 times. At-Touri stated that the residents will not abandon their village and will rebuild their community.