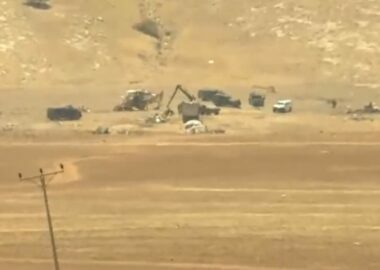 Israeli soldiers demolished, Wednesday, several structures and confiscated them in Khirbat Hamsa al-Foqa village, in the Northern Plains of the occupied West Bank.

Mo’taz Bisharat, a Palestinian Authority official in charge of monitoring Israel’s illegal colonialist activities in the Northern Jordan Valley, said the army surrounded and isolated the village, before invading it.

He added that the soldiers demolished the structures and confiscated them before leaving the village, but remained deployed nearby.

Bisharat also stated that the structures have been demolished more than six times within one year.

The demolition came in addition to the massive destruction and displacement carried out by the soldiers in early November of last year, 2020, displacing more than 85 Palestinians, including 35 children.