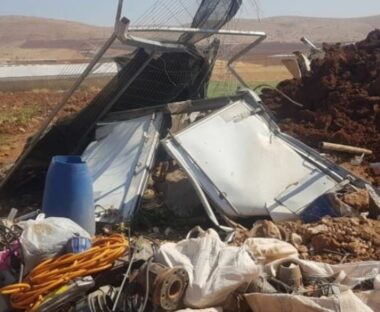 Israeli soldiers demolished, Tuesday, an entire Palestinian community in the Northern Plains of the occupied West Bank, displacing more than 85 Palestinians, including 35 children.

Mo’taz Bisharat, a Palestinian official who monitors Israel’s colonialist activities in the Northern Plains, said this displacement and demolition is the largest in the past three years.

Bisharat added that the soldiers have completely destroyed the Hamsa al-Foqa Bedouin community, east of Tubas, and displaced the families.

He also said that the demolition and destruction targeted more than 75 structures, including residential dwellings and barns, and that the soldiers rendered 85 Palestinians, including 35 children, completely homeless without any shelter or alternative.

The demolished community was established more than 40 years ago, and its inhabitants are shepherds.

On his part, Palestinian Prime Minister, Dr. Mohammad Eshteyya denounced the demolition and called on the international community to intervene and protect the Palestinian people, especially amidst the dangerously escalating Israeli violations.

Eshteyya added these measures are serious Israeli crimes that violate International Law, the Fourth Geneva Convention, and all related resolutions.

He said Israel is systematically destroying all chances and efforts that would lead to a just peace solution, based on the establishment of an independent, contiguous, and viable Palestinian state in the territories Israel illegally occupied in 1967, including East Jerusalem.

Eshteyya also said that Israel is using the fact that the world is consumed with the results of the elections in the United States to commit this crime, and to escalate its violations.