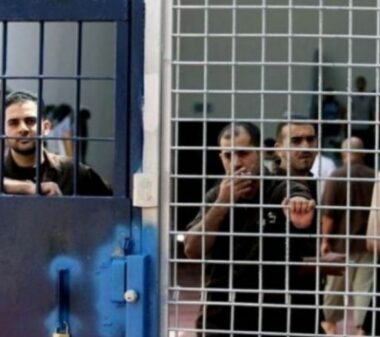 The Palestinian Prisoners’ Society (PPS) has reported that the Israeli Prison Authority has announced that 12 Palestinian political prisoners, held in Section 3 of Gilboa Israeli detention facility, are infected with the coronavirus.

The PPS said the twelve detainees are in Section three, which includes approximately 90 political prisoners, and added that at least 360 Palestinians are held in the facility.

The PPS stated that there are serious concerns that many other detainees are also infected with the virus, especially since the confirmed cases have been held with them.

In its statement, the PPS said it is impossible to get exact information regarding the number of detainees who have the virus, especially when taking into consideration that Israel is the only party that has access to this information.

“We can never know for sure how many detainees are infected with the virus,” the PPS said, “Israel controls this and all types of information regarding the detainees, including their exact health conditions.”

In addition, the PPS said that the number of confirmed coronavirus cases among the detainees since March of this year is 41, in addition to two who were tested after they were released from prison and were found to be positive.

Most of the cases are centered in Ofar Israel prison, especially the section which is used to house detainees before they are sent to other prisons, or to other sections of the facility itself.

The PPS called on various international organizations, especially the International Red Cross, to intervene and to pressure Israel into allowing an independent medical committee to examine the detainees and provide them with the needed treatment.

The PPS also called for the release of all imprisoned children, and the elderly, and to stop the ongoing invasions and searches into the detainees’ rooms, and the constant transfers of many detainees to other prisons.

It is worth mentioning that Israel is holding captive at least 4400 Palestinians, including 700 who have various serious medical issues, including cancer.