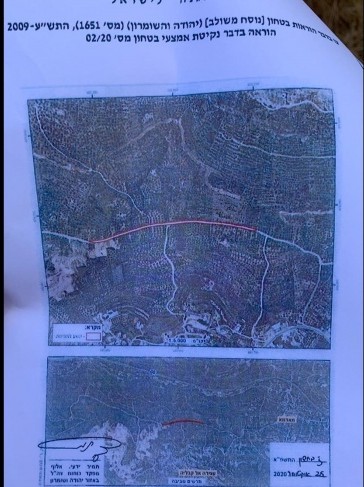 Local sources have reported that Israeli authorities posted demolition orders along a 3-kilometer stretch of road, saying that Israeli forces will be coming along within one week to destroy the road.

The Palestinian people lack paved roads in many parts of the West Bank where they live under martial law administered by the Israeli military. Paved roads are highly coveted, and this road in Nablus is no exception.

Since last year, when the road was constructed in order to alleviate traffic congestion and reduce truck traffic on other city streets, the road has been in high demand and is used constantly by Palestinian truck drivers.

The road in question is in the Asira al-Qibliyah village, in the Nablus District on the northern part of the West Bank.

Hafez Saleh, the mayor of the village, told reporters from the Palestinian news agency Ma’an that the road was opened last year by the Palestinian Authority, with funding from the Dutch government. The road is 3 kilometers long — 1400 meters of which are paved.

The road was constructed to provide an alternative route to an extremely dangerous stretch of road that had caused numerous car accidents over the years.

Because of Israeli restrictions and encroachments onto Palestinian land, the Palestinian Authority has been forced to find creative ways for the Palestinian people to get from one place to another within the West Bank. Israeli forces have constructed hundreds of roadblocks and have taken over large swaths of Palestinian land. This prevents Palestinians from having a contiguous land mass to be able to travel on.

The demolition order states that a small portion of the road (500 meters) is located in ‘Area C’, which they claim gives them the justification to destroy it. ‘Are C’ is a holdover from the 1993 Oslo Accord, in which Israeli authorities agreed to a gradual handover of Palestinian land to the Palestinians. That handover was supposed to happen within five years of the agreement, in 1998, but it never did. As a result, Israeli authorities still claim full control over the ‘Area C’ lands of the Oslo Accords.

The Palestinian villagers who live in the area have challenged the Israeli demolition order, but they have no legal recourse, since they live under Israeli martial law. The Israeli authorities stated that they will arrive within a week with armored bulldozers and military vehicles to destroy the recently-completed road.
Palestinians who live in the area plan to protest the Israeli destruction of their road.