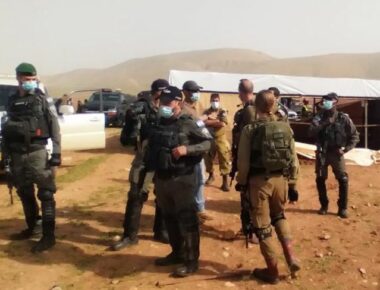 Israeli soldiers invaded, Monday, Khirbat Hamsa al-Foqa village, in the Northern Plains of the occupied West Bank, and began the demolition of its tents and sheds; the attack is the sixth of its kind this year alone.

Bisharat added that the soldiers started the demolition and removal of many residential sheds and tents, in addition to barns.

The official stated that the demolished structures were installed through donations by international human rights groups to provide shelter for the Palestinians who keep facing constant displacement by the Israeli occupation army.

The demolition came just one day after the soldiers invaded the community and took pictures of tents and barns.

It is worth mentioning that the Israeli occupation army demolished Khirbat Hamsa four times this month alone, in addition to the massive destruction and displacement carried out by the soldiers in early November of last year, 2020, displacing more than 85 Palestinians, including 35 children.