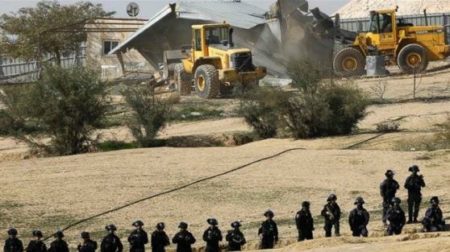 Israeli occupation authorities have made hundreds of Bedouin Palestinians homeless after demolishing their village in the Negev region for the 156th time, Palestine’s news agency says.

Eyewitnesses said, according to the PNN, that Israeli authorities, on Thursday, demolished crude homes and tore apart tents in the Bedouin village of Araqib, displacing its residents.

Authorities then dragged the debris and remains of the shelters out of the village. They also plundered chairs, pillows, mattresses and other belongings from the villagers.

Just like the previous times, Israeli forces, equipped with demolition machines, stormed the impoverished village and forcibly removed the residents from their homes before wreaking havoc on everything.

Al-Araqib is one of several Bedouin villages in the Negev desert, which are “unrecognized” by the Israeli regime.

Araqib, with about 220 residents, was demolished for the first time on July 27, 2010, but the village has since been rebuilt dozens of times by its residents and activists.

The United Nations says the vast majority Palestinian structures are destroyed or seized because Israeli policies make it virtually impossible for Palestinians to obtain building permits.

Demolitions of Palestinian homes and structures. by Israeli authorities, have raised alarm among diplomats and human rights groups over what they regard as Tel Aviv’s continued violation of international law.

The Palestinian Central Bureau of Statistics (PCBS) reported, in March, that Israel had occupied more than 85 percent or some 27,000 square kilometers of historical territories of Palestine, in an expropriation process which still continues unabated.

More than half a million Israeli settlers live in more than 230 settlements built since the 1967 occupation of the West Bank and East Jerusalem al-Quds. Built on the occupied land, the settlements are internationally condemned as illegal.