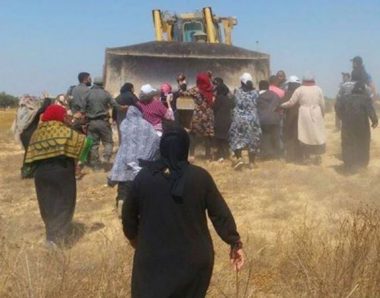 The Israeli authorities, Tuesday evening demolished all structures in the Palestinian Bedouin village of Araqib, in the Negev desert, for the 165th consecutive time, displacing its residents, again.

According to local sources, Israeli police forces and employees from the Bedouin development authority, which is responsible for such demolitions, stormed the village and forcibly removed the residents from their homes before wreaking havoc on everything.

Police forces arrested Sheikh Sayyah Attouri, chief of the village, who has been arrested more than once before during similar demolition campaigns.

The police also arrested his son, Aziz, but later released him and ordered him for interrogation on Thursday.

Recently, the Israeli authorities indicted Sheikh Attouri and two of his sons as well as local activist Saleem Attouri over different claims, including illegal construction and appropriation of state land. The Israeli authorities also imposed exorbitant financial penalties on the Araqib villagers in recent times.

Araqib is one of several “unrecognized” Bedouin villages in the Negev desert.
The demolition of this, and other villages in the Negev is a systematic Israeli policy aimed at expelling the native population from the Negev, and forcing them into government-zoned areas to pave the way to expand and build new settlements for Jewish-only communities.