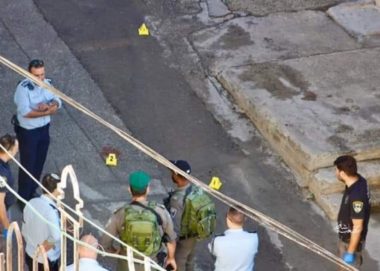 The Palestinian Detainees Committee has reported that the Palestinian woman, who was shot and seriously injured by Israeli army fire, on Wednesday morning, is currently in a very critical condition, and is hooked to life support machines at an Israeli hospital.

Karim Ajwa, a lawyer of the Committee, said that the wounded woman, Soheir Islamiyah, 38, was moved by the soldiers to Shaare Zedek Medical Center, in occupied Jerusalem.

Ajwa stated that he managed to see the seriously wounded woman at the Israeli hospital, and added that she is in a critical condition, currently dependent on life support machines at the Intensive Care Unit.

He also said that the Ofar Israeli military court, near Ramallah in central West Bank, will be holding a hearing on the case of the wounded woman, this coming Sunday.

It is worth mentioning that Soheir was shot and seriously injured, on Wednesday morning, near the Ibrahimi Mosque in Hebron, in the southern part of the West Bank, after the army claimed he attempted to stab them.

After shooting her, the soldiers prevented Palestinian medics from approaching her to provide her with the urgently needed medical care, and later called for an Israeli ambulance and transferred her to Shaare Zedek.

No soldiers were injured in the alleged stabbing attempt.