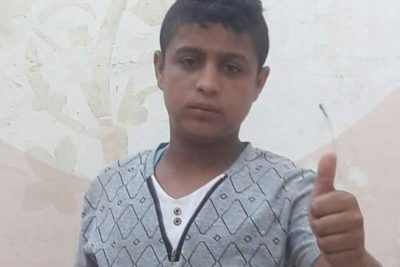 An Israeli soldier was sentenced on Monday to a month of community service for killing a Palestinian child during a Great Return March protest in the occupied Gaza Strip.

The Middle East Monitor reported that the soldier – whose name has been banned from publication – was convicted by a military court in relation to the death of 14-year-old Othman Hilles, who was shot during a demonstration on 13 July 2018.

It is the first conviction in connection to the huge number of casualties among Great Return March demonstrators, with Israeli forces shooting more than 7,000 with live fire since March 2018.

Despite Hilles being shot while unarmed and posing no threat to Israeli soldiers, the soldier was only convicted of “disobeying an order leading to a threat to life or health”, as opposed to manslaughter. The military court sentenced the soldier to one month community service, as well as a demotion.

The shooting of Hilles was captured on film, likely a factor in the soldier being brought to trial at all. This is the first conviction of an Israeli soldier for killing a Palestinian unarmed demonstrator in Gaza – although there have been more than 200 Palestinian civilians killed in the past two years of demonstrations.

According to the Times of Israel, the soldier – a sniper from the Givati Brigade – was not convicted of a more serious offense like manslaughter “as military prosecutors were unable to collect sufficient evidence connecting his gunshot to [the boy’s death]”.

The Israeli military spokesperson confirmed the conviction in a statement, saying that the soldier “fired at a Palestinian rioter who climbed the border fence…without obtaining permission from his commanders while not following the rules of engagement or the instructions given to him earlier”.