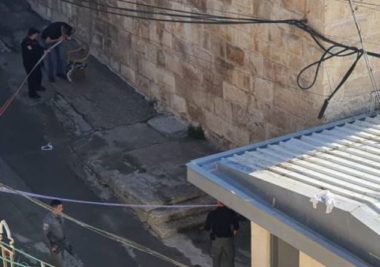 Israeli soldiers shot and seriously injured, on Wednesday morning, a Palestinian woman near the Ibrahimi Mosque, in the center of the southern West Bank city of Hebron, after she allegedly ‚Äúattempted to stab them.‚ÄĚ

Media sources in Hebron said the soldiers shot the Palestinian woman and left her bleeding on the ground without allowing Palestinian medics to approach her.

They added that the soldiers closed the Ibrahimi Mosque to the Palestinians and installed many roadblocks in all surrounding areas, before completely sealing them.

According to the Israeli army in occupied Hebron, the Palestinian woman allegedly ‚Äúpulled out and knife and attempted to stab an officer, before she was neutralized.”

It claimed that, according to its preliminary investigation, the woman crossed several military roadblocks before she “attempted to stab the soldiers,” and added that the attack “appears to be preplanned.”