Israel Forces An Elderly Palestinian To Demolish His Home In Silwan 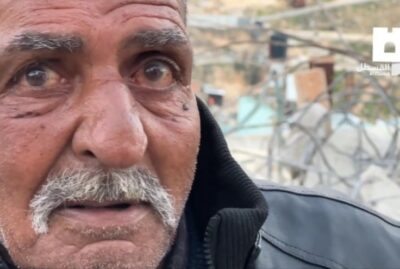 The Israeli authorities in the occupied capital, Jerusalem, forced an elderly Palestinian man to demolish his home, Friday evening, in Ras al-Amoud in Silwan town, south of the Al-Aqsa Mosque.

The Al-Qastal News said the soldiers forced Mahmoud Abu Thiab, 78, to demolish his home after his appeals were denied. The small, destroyed home provided shelter for the elderly man and his wife.

The Palestinian was informed that he either demolishes his home at his own expense or be forced to pay 50-60 thousand shekels in fines and fees if the city uses its workers and equipment to destroy the property.

With tears in his eyes, Mahmoud told Al-Qastal News: “Where are we supposed to go?!, What are we supposed to do…?! We have nobody to take care of us, we are elders, and we have no place to live…, Israel has no mercy and knows no compassion….”

“What else can I say? We are just homeless now… I don’t have money; I am a poor elderly man, and my wife too… Where are we supposed to go, enough is enough, they told me you either demolish your home or we will, I have no resources, I cannot pay those expenses and fines…” he added.

Dozens of Palestinians face the same fate and are forced to demolish their homes and property to avoid these excessive fines.

In 2021, the Israeli Committee Against House Demolitions (ICAHD) revealed that Israel demolished 937 homes and structures that year, displacing 1,119 Palestinians and affecting 12,658 others.