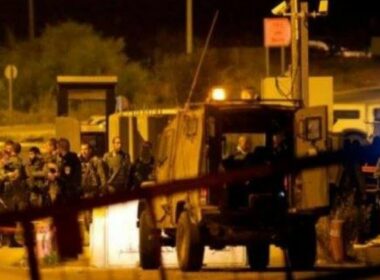 Israeli soldiers installed, earlier Saturday, many military roadblocks, closing main sections south of Jenin, in the northern part of the occupied West Bank, before stopping and searching many cars.

Media sources said the soldiers installed several roadblocks at the junctions of ‘Arraba town, the village of Kafrit, on the main road in Be’er al-Basha village, south of Jenin.

They added that the soldiers stopped and searched dozens of vehicles, causing extended traffic jams and delays, in addition to interrogating many Palestinians while inspecting their ID cards.

It is worth mentioning that protests against the Israeli escalation have been ongoing across the occupied West Bank, especially after three young men were assassinated by undercover Israeli soldiers in Nablus, in northern West Bank, Tuesday.