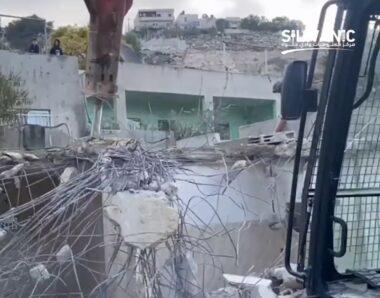 On Wednesday, the Israeli authorities in the occupied capital, Jerusalem, forced a Palestinian family to demolish its three homes in Silwan town, the Wadi Hilweh Information Center In Silwan (Silwanic) has reported.

Silwanic said the Nassar local family had to demolish its three homes in the Wad Qaddoum area in Silwan, south of the al-Aqsa Mosque in Jerusalem.

Mohammad Nassar told Silwanic that the land where the homes are built was purchased by his father forty years ago.

Mohammad added that the family has been subject to constant violations over the last few years, when Israel decided to confiscate the land where the homes are built, after declaring it “public property.”

He also said that the family had to demolish the homes to avoid a fine of 80.000 Shekels, in addition to the hyped demolition costs if the city uses its workers and equipment.

While Israel continues to build and expand its illegal colonies in occupied Palestine, in direct violation of International Law, the Fourth Geneva Convention, and various international resolutions, the Palestinians in and around East Jerusalem, and the rest of Area C (%sixty-one the occupied West Bank), continue to be denied construction permits, in addition to the excessively prohibitive costs of the applications.

On Wednesday at dawn, the soldiers abducted six Palestinians, including a former political prisoner, in several parts of the occupied West Bank, including the occupied capital, Jerusalem.

Also at dawn, the soldiers invaded many communities in the northern West Bank city of Jenin, searched and ransacked homes, and installed a roadblock.