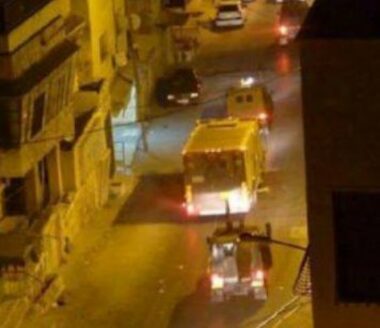 Israeli soldiers abducted, on Wednesday at dawn, six Palestinians, including a former political prisoner, in several parts of the occupied West Bank, including the occupied capital, Jerusalem.

The family said the soldiers smashed the main door of the property before invading it, and violently searched the home, causing excessive damage.

It is worth mentioning that Ibdah was imprisoned by Israel for three years and was only released near three months ago.

The soldiers also invaded Biddu town, northwest of Jerusalem, and abducted Fadi Mohammad Khdour, after assaulting him and his family while violently searching the property.

Also, the soldiers abducted Saleh Ghassan Obeid and Mo’tasem Hamza Obeid, both from the al-‘Isawiya town in Jerusalem, while walking near the French Hill area.

In addition, several army jeeps invaded the ar-Ram town, north of Jerusalem, and drove around its neighborhoods before withdrawing.

Furthermore, the soldiers invaded the Jabal al-Mawaleh area, in Bethlehem city, and abducted Mohammad Mousa Hijazi, 23, from his home.

Also at dawn, the soldiers invaded many communities in the northern West Bank city of Jenin, searched and ransacked homes, and installed a roadblock.