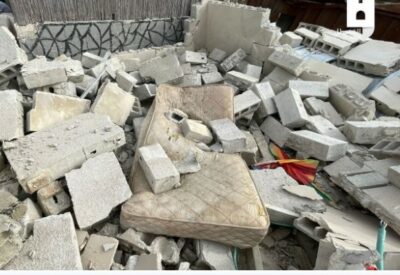 The Israeli occupation authorities in Jerusalem forced, Saturday, a Palestinian to demolish his home in Beit Hanina, north of the occupied capital, rendering him and his family homeless only 45 days after the family moved in.

The Israeli authorities claim the Palestinian built his home without a permit from the City Council.

Standing in front of the rubble of his home, Moath Rajabi said he was handed an official document ordering him to demolish his home or face heavy fines and fees in addition to the demolition costs if the city uses its workers and equipment.

“I just moved into my property with my wife and children 45 days ago,” he told the al-Qastal News Agency, “I had to borrow a lot of money to build my home to shelter my family.”

He added that he received the first order on November 24th, and has since been trying to file appeals, however, he was handed the second order with an ultimatum that also included a threat of even heavier fines and fees.

The Palestinian inherited the land from his father and built his fifty-five square/meter home on it, before he was forced to turn it into rubble. He filed several appeals through a lawyer he hired, but the city denied them before his lawyer informed him that he needs to cut his losses and demolish his own home because the city wants to impose even much higher fines and fees and is not willing to halt the demolition.

“What can I do, they [Israel] keep building and expanded their illegal settlements on stolen lands, and do not want us to live even in a small home like mine, Moath said, “I cannot afford the high prices of rent, this is my land, and I will rebuild by home sooner or later.”