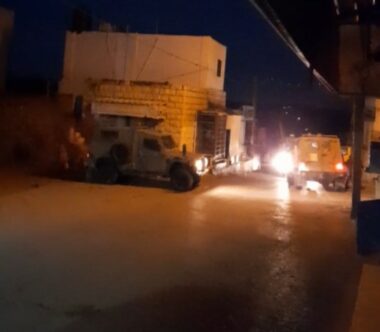 Israeli soldiers detained, on Saturday at dawn, twenty-two young Palestinian men, including siblings, after the army stormed and ransacked dozens of homes near Hebron city, in the southern part of the occupied West Bank.

They added that the soldiers interrogated scores of Palestinians in their own homes while ransacking their property and inspecting their ID cards.

The soldiers then abducted twenty-four young men, including several siblings in addition to a father and his son, and took them to a military base where they detained and interrogated them for several hours, before releasing them.

The Palestinians have been identified as: