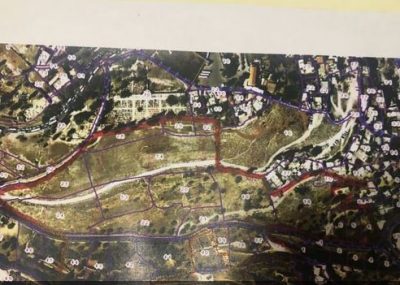 The City Council in occupied Jerusalem issued orders for the illegal annexation of dozens of Dunams of Palestinian lands in Silwan town, south of the Al-Aqsa Mosque, under the pretext of using them for “gardening, irrigation pipes, roads and public gardens.”

Silwanic added that the posted orders also included maps showing the lands that will be confiscated, under of the pretext of “gardening vacant lots.”

It stated that these orders pose serious threats to dozens of Dunams of Palestinian lands in Wadi ar-Rababa, Wadi Hilweh, Be’er Ayyoub and Nabi Daoud, and added that the lands are owned by the Palestinians, who have legal documents proving ownership, in addition to other lands owned by the Greek Orthodox Church.

Jawad Siyam, the head of Wadi Hilweh Information Center, said the lands have, for dozens of years, been planted with olive trees, fig trees and berries; however, in recent years, Israel started preventing the Palestinians from entering them.

Israel has also been bulldozing and uprooting large areas of these lands, in addition to demolishing property, especially in Wadi ar-Rababa, under the pretext of being part of the “Public Gardens.”

Silwanic added that, although the new orders are for five years, previous experiences prove that once the City Council, the Department of Archeology or the Department of Natural Resources, take control of Palestinian lands, they end up confiscating them permanently, and use them for the construction and expansion of the illegal colonies, and outposts, in Silwan, as well as other vital parts of occupied Jerusalem.

Many areas in Silwan are frequently targeted for annexation, especially since Israel is building a pedestrian bridge for tourists and colonial settlers, linking between the ath-Thoury neighborhood, Nabi Daoud and Wadi ar-Rababa, and is preparing for building a restaurant, in addition to pathways for pedestrians. Siyam said that the lands Israel is trying to confiscate are privately owned by the Palestinians, and are the only lands left for Silwan to build homes, schools and public gardens for the inhabitants, but the City Council has been denying construction permits, in addition to demolishing homes and property.

“The indigenous Palestinians who own the lands are the ones who should benefit from them, by farming and developing them,” Siyam added, “But Israel denies them these basic rights, and is punishing them if they build, so that it can use the lands for its colonialist projects.”

He affirmed that the Palestinians in Silwan are well aware that the new Israeli orders aim at completely and permanently confiscating their lands, especially since the city confiscated and closed lands, several years ago, in the al-Ein al-Hamra area in the town, for what the Jerusalem City Council said “public benefit,” but the lands ended up owned by El’ad colonialist foundation, which funds and supports the construction and expansion of Jewish-only colonies in occupied Jerusalem.

Furthermore, Siyam added that Israel also confiscated lands in Ras al-Amoud neighborhood, under the pretext of turning a police station into a space for public use, but the station was turned into a colony instead.