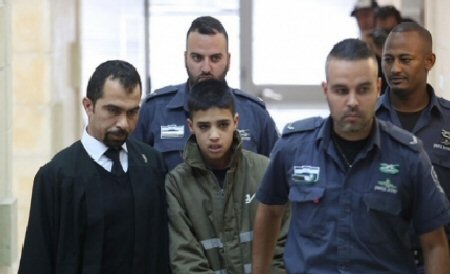 The Palestinian Prisoners Center for Studies reported that Israeli military courts have imposed fines, against Palestinian minor detainees, amount to 170.000 NIS during the first quarter of this year.

The spokesperson for the center, Reyad Al-Ashqar, said that Israeli courts impose heavy fines on most detained children , in addition to the actual prison terms.

He added that the fines constitute a heavy burden on the detainees’ families and an arbitrary punishment exercised, by the courts of occupation, against them, with the aim of terrorizing and preventing them from participating in resistance actions.

He explained that the total amount of fines that Ofra prison imposed against child detainees, during the first three months of this year, adds up to 170.000 NIS.

Al-Ashqar  noted that this policy is a clear and political theft aimed at looting money from the families of the children, in order to pressure and blackmail them.

He pointed out, according to Al Ray Palestinian Media Agency, that Israeli military courts impose heavy fines for trivial reasons.