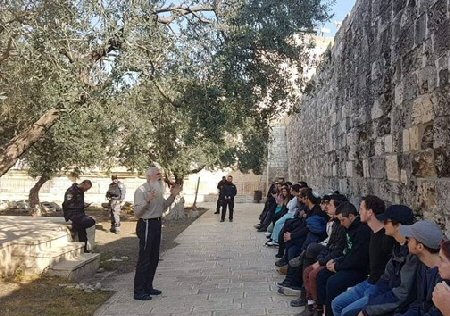 Over one hundred Israeli settlers stormed Al-Aqsa Mosque compound on Sunday, under the protection of heavily armed Israeli soldiers and police, for the Jewish holiday of Passover, also known as “Pesach”.

Head of the public relations office at the Islamic Endowment Department, Firas al-Dibs, confirmed that some 167 Israeli settlers stormed the compound, through the Moroccan Gate, from the early hours of Sunday and throughout the afternoon.

Armed Israeli soldiers and police provided protection to settlers as they provocatively toured the compound.

Al-Dibs pointed out that a large group of performed rituals while inside the compound.

Such visits spark frustration among Palestinians who see the incursions as a direct threat to Palestinian sovereignty and any potential for a future independent Palestinian state, which has been effectively marred by increasing settler presence across Palestinian land.

Al-Aqsa Mosque compound, which sits just above the Western Wall plaza, houses both the Dome of the Rock and Al-Aqsa Mosque. The third holiest site in Islam, it is also venerated as Judaism’s most holy place, as it sits where Jews believe the First and Second Temples once stood.

Despite the agreement with Jordan — which is the custodian of Al-Aqsa — Israeli authorities regularly allow Jewish visitors to enter the site, often under armed guard. Such visits are typically made by right-wing attempts to unsettle the status quo at the site, and coincide with restrictions on Palestinian access, including bans on entrance and detentions.

Meanwhile, Israeli forces have almost entirely sealed the occupied West Bank and the besieged Gaza Strip, excluding humanitarian cases, for more than a week, for Passover, preventing scores of Palestinians with Israeli-issued permits from access their work, in Jerusalem and the rest of Israel.

Severe restrictions on movement for Palestinians are typically implemented by Israeli authorities during Jewish holidays for alleged security purposes.

The closures do not apply to Israeli settlers residing illegally in the West Bank.