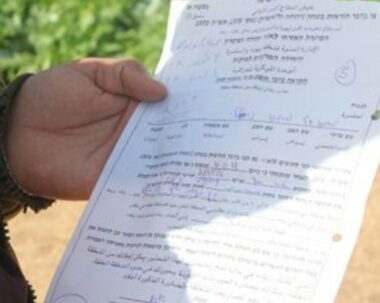 Israeli soldiers handed, Thursday, a demolition order targeting a four-story residential building in Shu’fat town, in occupied Jerusalem, and informed the families that they only have two weeks to leave.

Nasser Abu Khdeir, a former political prisoner, said the demolition orders target his family’s building in the western area of the town.

He added that ten families, consisting of about 55 Palestinians, live in the residential building.

Abu Khdeir stated that the apartment building is about 200 meters from the illegal Ramat Shlomo colony, which was built on illegally confiscated Palestinian lands.

In the year 2005, Israel forced the family to seal the building with concrete blocks, after issuing an order to demolish it but allowed them to reopen it since the year 2015.